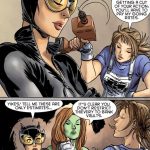 Update: The previous title of this post used the term “spirit animal” which is appropriative and not cool. I apologize to any who may have felt I was making light of their beliefs.  I’ve been reading more comic books since my library got Hoopla. One I particularly enjoyed was Gotham City Sirens.
Read More

I recently re-watched Zach Snyder’s Man of Steel because it was New Year’s Eve, my wife was asleep, and I wanted to see if my opinion of it shortly after it came out (in which I rather liked it) held up. It did. Oh, sure, a few of the Marvel-verse movies
Read More
I’m not an avid comic book reader. I read some Supergirl in middle school and high school, some Spider-Man when the movies came out, and a few video game tie-ins. I’m starting to get more into them with the New 52 giving me a place to actually start. But overall, I’m what
Read More 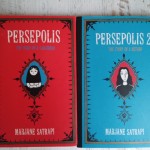 My co-worker who reads comics came to me with a suggestion for two graphic novels she read as a class assignment in high school. Described to me as the story of a young girl in early 1980’s Iran who struggles with politics and expectations of women, but grows up and becomes punk,
Read More 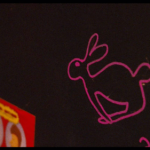 I spent all morning pouring over our wedding playlist. I managed to cut an 8 hour playlist down to 5 hours and change, and am putting off the task of perfectly mixing the songs for party optimization. As a kid of the 90s, the perfect playlist mix is an art that takes
Read More

“It’s Betty and Veronica meet Breaking Bad. But With baking.” That’s how Jackie Crofts described Nutmeg ]to me at Indy Pop Con. It’s a tagline that certainly got my attention. Nutmeg is set in a high school, where we meet Cassia, the new girl at the school. We also meet her soon-to-be
Read More 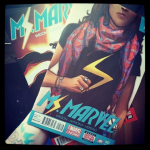 Last week, John and I were at Comic Carnival perusing the aisles for new reading material. There it was, the cover of Ms. Marvel, catching my eye with her lightening bolt t-shirt and a colorful scarf tied around her neck. Normally I wouldn’t judge a book by it’s cover, but when it
Read More 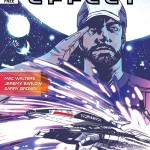 Confession: Comic books have never been something that I’ve really gotten into. I had a few Supergirl, Spider-Girl, and Wonder Woman comics in high school, but that was about it. They were fun, but they really didn’t do anything for me. Recently, though, I’ve had the desire to try again. I’ve become
Read More