I recently re-watched Zach Snyder’s Man of Steel because it was New Year’s Eve, my wife was asleep, and I wanted to see if my opinion of it shortly after it came out (in which I rather liked it) held up.

I don’t think this juxtaposition was accidental.

Oh, sure, a few of the Marvel-verse movies over the last 10 years were better (Iron Man, The Avengers, Captain America: The Winter Soldier, Guardians of the Galaxy, Age of Ultron), but those Marvel movies didn’t have to follow up Christopher Nolan’s Batman in the same universe. Snyder did.

Mark Millar, who, of all people, is entitled to voice an opinion about comic books and be heard, wrote about his disappointment with Man of Steel for Games Radar last fall. His criticism is of the bleak, ‘realistic’ post-Vietnam era Wolverines and Punishers; the archetypes that have evolved into Tony Stark’s PTSD and paranoia, Jessica Jones’ season-long examination of rape, Black Widow’s ‘graduation.’ He sees the Golden Age of Comics’ heroes as, among other things, devices of hope during the Great Depression and Second World War. He mourns that one of the last bastions of that age, Superman, has now fallen under the shadow of America’s lost wars, the security state and militarization of police forces, and terrorism. He was never Superboy; Jonathan and Martha hid him away while the NSA collected meta-data.

Objectively, Millar is correct: the idyllic farmboy who was the All-American Boy With God-Like Powers has taken a backseat. 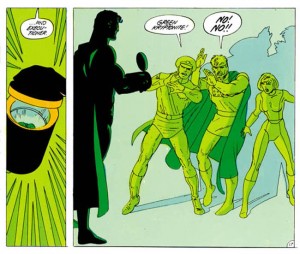 Some men, you just can’t reach.

Objectively, Max Landis, who loves Superman with a passion bordering upon creepy, is correct when he “believes Superman should have killed Zod, and he should have done it right away, saving the aforementioned hundreds of thousands of victims that were ultimately slaughtered in their punching fest showdown. ‘Because he’s not responsible for Zod,’ Landis explains. They should have fought in space or on the moon, away from the helpless people of Earth Superman has chosen to protect…” (To the people who say that Superman doesn’t kill: you’re objectively wrong; sit down and let the adults talk.)

Objectively, BuzzFeed and Watson Technical Consulting were correct when they crunched the numbers on the damage to Metropolis and its economic impact to the tune of $17 trillion. (Global economic output in 2012 was estimated at $85 trillion, but we’ll return to the global aspect later).

What they’re missing, what is necessary here, is that in order for Superman to function in a universe with a Batman who PATRIOT Acts the entire city of Gotham, where terrorism and mass shootings and rising sea levels are real, he had to be dirtied up. The character doesn’t work when he’s frozen in time in an idealized America. (I say idealized because, contrary to the 24 hour news cycle’s insistence, crime against the person is at its lowest point in human history). If you tried to preserve Superman as Millar would like and Landis fanatically demands, you end up with Alex Ross’s Superman from the fantastic Kingdom Come – a super hero who was unable to save Lois when the Joker came to town, a demi-god who retreated to his Fortress of Solitude because he couldn’t change with the world; a man whose rage almost broke the world when he returned.

Then there’s the upcoming Dawn of Justice. We have Nolan’s Batman, which completely and finally divorced the Dark Knight from the campy 1960’s TV show. Batman is as he should be – he rules by fear, believes that people are fundamentally bad, and as the CEO of a multi-billion dollar corporation, is totally self-assured that his solutions are the right solutions. He is also battered from his years of being the Batman. This is who Affleck’s Batman is, and the arrival of Kryptonian aliens who level a nearby city is going to put Wayne on DefCon 5. In order to have that situation, in order to have Superman be someone that the Batman views as a serious threat to Earth, just as Batman needed to be separated from Adam West (and Joel Burn-In-Hell Schumacher) Superman needed to be split from the Golden Age, golly gee, and yes, Richard Donner. He needs to be somewhat terrifying – it emphasizes what Landis laments as if it’s lost: “instead of absolute power corrupting absolutely, it has absolved him from fear, and greed, and hate, and all of the weaknesses that stem from human insecurity.” “Look what I could do if I really wanted to but choose not to even though none of you could stop me,” is the cynic’s version. 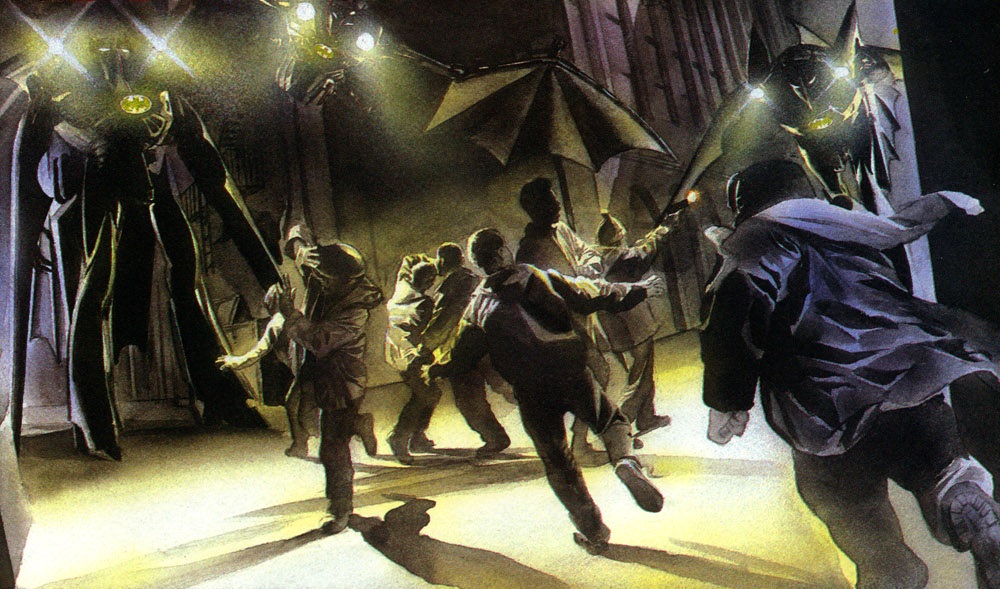 “Batman? Batman…has his city under control.”

The Golden Age Superman doesn’t work as a character anymore and Snyder (and producer Christopher Nolan) recognized that. However, they didn’t destroy the character in doing so; rather, I would argue that they used a light touch to weave in aspects of the most archetypal Superman, Grant Morrison’s All Star Superman while emphasizing the fact that Kal El has always known he was apart even while being taught to love his adopted planet and its people.

While Jonathan Kent, in a desire to keep his son safe, exacerbates the sense of isolation Clark feels, the fear he communicates to his son, the seriousness with which he imparts a “showing what you can do is dangerous” to Clark, Snyder gives Superman something we rarely see without the wand-waving of kryptonite – he shows the Man of Steel as vulnerable. His skin may not be able to be pierced, but we see him struggle with rescuing Pete Ross when their school bus goes in the river; we see him humiliated by high school bullies; we see him humiliated again in a bar (and his subsequent rage taken out on the bully’s tractor-trailer, which is something we know he must feel; if he doesn’t, he’s Brian Singer’s automaton from Superman Returns).

Finally, we see him in his battles with fellow Kryptonians being beaten again and again, destroying the world he has come to love, because this is the first time his strength doesn’t automatically save the day. If his vulnerability and humiliation aren’t made a front-and-center issue, he is neither human nor interesting. He’s Dr. Manhattan with pants. (As an aside: I don’t give a shit how much damage was done and how many people died in Metropolis: Zod was going to wipe the planet clean. Smash up Gotham while you’re at it if you need to).

To Landis’ point about the destruction and death that occurred during Superman’s battle with Zod and Co., and to Millar’s complaint about superhero films constantly re-enacting 9/11 and to BuzzFeed’s calculation of the damage to Metropolis as all being out of character for the Last Son of Krypton, for making the last man standing amongst rubble into a rock star rather than removing the conflict Somewhere Away:

I would look back to that symbol of hope that Superman is supposed to represent (and that Jor El tells us is the meaning of the House of El’s glyph).

I would say that the message conveyed from the artistic destruction and imagery of towers falling, smoke rising, and glass everywhere with Superman still standing is still one of hope – we’ve been through the crucible; we rebuild. If that’s not hope, if that’s not the essence of Superman preserved, I don’t know what is. 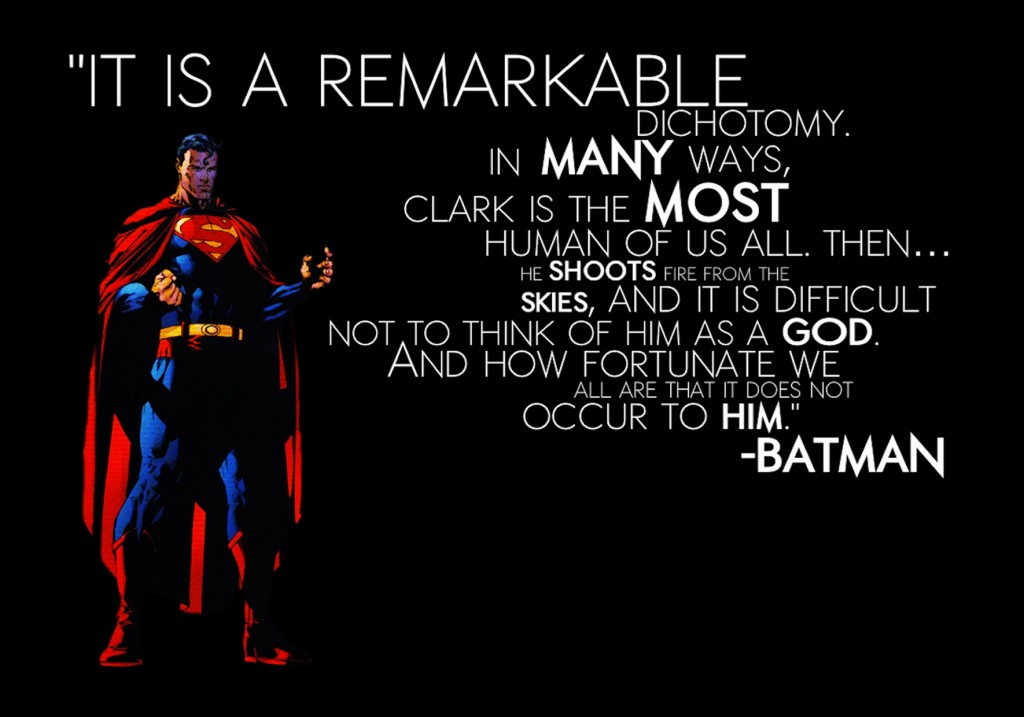 Justin has a liberal arts background and plays a lawyer by day, but off the clock, he likes to build things, fix things, work outdoors and play a lot of video games. He also spends a lot of time thinking about the 1st, 4th, 5th and 14th Amendments, loves dogs, and is cautiously warming up to being a dad.

View all posts by: Justin