About a month ago I wrote a post about gaming with RSI, wondering what solutions other had found. A few people messaged me about 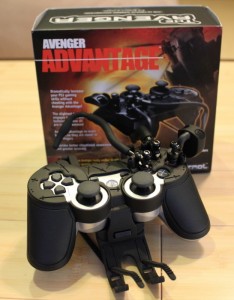 a product called the Avenger Controller. So I went over to their site to check it out.

The Avenger Controller isn’t a controller per se. It’s an medieval looking overlay you put on your stock controller. It’s made for hardcore gamers, to increase responsiveness and precision. To achieve that goal, they make it easier to press buttons, and changes your hand position. They make a model for the Xbox 360 and the PS3. I ordered the PS3 version since that is the controller that gives me problems.

When my Avenger Controller arrived in the mail, I promptly opened it up and snapped it onto my PS3 controller. There was some paperwork telling you how to set it up and to make sure to watch the YouTube video for detailed setup instructions. I kind of scoffed at this and just started playing. Don’t do that. When they say “watch the YouTube video,” do it. I had it set way off for my purposes. I tried booting up Fallout 3 (a game I haven’t been able to play because of my issues with the PS3 controller), and that was the wrong game to try with. Plus, everything was entirely too sensitive for me.

I couldn’t figure out how to set the controller up correctly, so I hung my head in shame and did what I should have to begin with. I went and watched the video. The video made it very easy to figure out how to tweak the Avenger just so. I switched over to Black Ops, went into zombies mode, and started tweaking my experience.

The Avenger Controller is definitely geared toward first person shooters with its hair trigger settings. I set mine to a much looser setting than most I’m sure, because I was using it to alter my hand position, instead of become precise. I tend to play third person shooters, and usually ones with some RPG elements to it (like Defiance or Mass Effect) so the precision did me more harm than good.

The Avenger was used during a time when I was working some crazy hours, so my RSI was acting up more than usual. The ideal time for this kind of testing IMHO. So, did it work? As well as it could. Here’s what did work:

These three features made it so I didn’t feel the numbness/tingling in my ring and pinky fingers, and my palm. With a standard PS3 controller I’d feel like I couldn’t grip the controller after about 15 minutes on a bad day, or an hour on a good day (this was tested on “bad days” exclusively, due timing). I was able to play without that happening at all with the Avenger.

The thing that didn’t work, is something the Avenger cannot fix. I still got the stabby feeling in my thumb/wrist. This is because for me the joysticks are placed in a really awkward position on the controller. I feel as though it makes me move in an unnatural way.

Overall, I’d recommend this if your RSI is more of the numbness and tingling towards the outside of your hand and palm. If you have the stabby around the thumbs (and the PS3 triggers it), it probably won’t help. I can now play PS3 games with my husband (which tends to last for 30-45 minutes a session) without nearly as much pain. Which makes this a better solution than any I’ve seen so far.

Disclosure: I received the The Avenger Elite PS3 at a discount for review purposes.