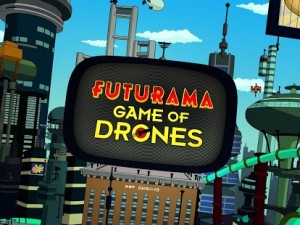 Sometime last year it was announced that a Futurama mobile game was on the way.  Being a huge fan of Futurama, I was very excited about this. While I had never personally played The Simpsons: Tapped Out, I had seen it in action, and was very interested in playing a Futurama game in this style.  I was pretty surprised when the game turned out to not be anything like Tapped Out at all.

Plain and simple, Futurama: Game Of Drones is a Candy Crush Saga clone.  You have to match 4 of a kind instead of 3, but other than that, it’s the same concept.  You’re  given a goal of some type (clear X amount of certain colors, get a certain object down to the bottom, etc…), and have a certain number of moves to complete it.  If you match more than 4 of a kind, you get some sort of a power drone that helps you clear things faster.  You are introduced to different boosters in certain levels, then encouraged to buy more via micro-transactions.

All that being said, like much of the world, I’m a Candy Crush junkie.  As such, I’m really enjoying the game.  It took something I already enjoyed, and added a nice coat of Futurama paint on it, which is something else I really enjoy!  Unlike Candy Crush, the minimal amount of plot is something you can actually follow, and will make you laugh.  Also, the overworld is fully animated in beautiful 3D in the world of Futurama.  It’s actually quite impressive for a mobile game.

My final thought is that you should definitely play this game if you like Futurama, Candy Crush Saga, or both!  I’ve been playing it for a week now, and only one other friend on Facebook currently is.  Join me!

Futurama: Game Of Drones is available for both iOS and Android.