One of the few Zombie Run banners up at the event.

If you do not recall, last year I was supposed to participate in The Zombie Run.  This, however, did not happen, and I went through an awful customer service experience with this run, and their parent company, Human Movement Management, which you can read all about HERE.

The Zombie Run issues no refunds for canceled events, but claimed they would make it right by coming back in 2015 and letting everyone who signed up last year run for free.  Shockingly, they made good on this promise.  After experiencing what a Human Movement Mangement event is though, I wish they hadn’t bothered.

When I arrived at White River Paint Ball in Anderson, IN, I was greeted with a $10 parking fee.  It did not appear to be for any other reason than they wanted more money.  I’ve been to other events here in previous years, and don’t recall being charged for parking.

After parking at about 8:15pm, I got into a huge line of people waiting.  I asked if I had to wait in this line if I already printed out my signed waiver, and was told yes.  As it turns out, the waiver put online for everyone to sign was from 2014, and invalid.  Getting through this line took a good 30 minutes.  When I finally got to what I thought was registration, it was a table with three people sitting at it, with 3 tablets for people to digitally sign waivers.  There were hundreds of people behind me (as well as in front of me), and they did not have adequate staff to keep things moving efficiently.

After finally getting my waiver signed, I was pointed towards line number 2, which was for registration.  This line had the hundreds of people in front of me who had already waited in the waiver line, and it looked like their line wasn’t moving much at all.  When I reached the front of this line after another 25 minutes or so, I found that, while they had three people doing registration, they only had one tablet to scan people’s tickets, which is what was taking them so long.  The other two people were there to hand out bibs (which served absolutely no purpose, as the race was not timed or tracked in any way) and write on my hand in permanent marker for which wave I was running.

After getting through this line, I was ushered to a THIRD line, where I could pick up all the swag that came with the race.  This consisted of a t-shirt, a glow bracelet, and a souvenier bag.  Even though we were required to provide our shirt sizes when signing up for the race months in advance, they didn’t have packets pre-sorted, and it was quite the clusterfrak.

Now is when I started to notice how cheap everything was, and how little personality this race had.  There were a couple of Zombie Run flags, and a couple of graffiti-painted tarps, but other than that, the place was pretty bare.  Then I decided to put on my glow bracelet.

Let’s compare what the bracelets in the promotional photos look like vs. what was provided: 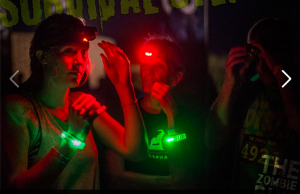 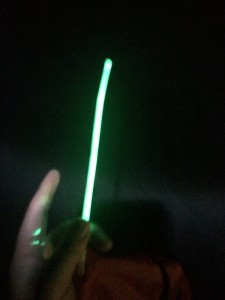 Bracelets provided are cheap, and the liquid leaks out of them.

The bracelets in the promotional photos look pretty slick.  I would have dug getting one of those.  However, the bracelets provided were cheap, cost-cutting garbage.  The second I cracked it to start the glowing effect, it immediately leaked onto my finger, as pictured above.  I thought it was a fluke, so I went back to the registration tent to get another one.  When I got there, I overheard the woman at the desk talking to someone else about how the liquid was non-toxic, so apparently I wasn’t the only one this was happening to.  I asked for a replacement bracelet, which did the exact same thing.  On top of that, the length of the bracelet was meant for a child, and I had a hard time fitting it around my wrist as an adult male.

After about another 25 minute wait, it was time for my wave of people to start.  There’s an army man on a megaphone giving a speech about the apocalypse, that I noticed he changed up a bit every time.  He was actually putting effort into creating the illusion of the event, and he was both interesting, and very funny.

We’re told to move forward into this tent with mist in it.  There’s a couple more army people in it, and when we exit it, there’s nothing.  We’re standing there waiting for instructions, and after a couple of minutes realize that we’re just supposed to start the run, so we do.

The first thing we come upon is a field with some broken down cars and wooden shacks.  There’s zombies randomly roaming around, and it’s actually kind of cool.  The thing is, I’ve been to this place before for other runs, and the same stuff was there.  I’m almost positive this setup is part of one of their paintball fields, and not setup by The Zombie Run.

As the run continues, there are large stretches with absolutely no zombies.  Then there’s a bunch.  Then there are none again.  Also, after completing the entire race, there was not a single obstacle throughout the entire course.  It was advertised as having obstacles.  In fact, here’s a direct quote from the waiver I signed:

2. THE EVENT PRESENTS EXTREME OBSTACLES INCLUDING, BUT NOT LIMITED TO, DIFFICULT CLIMBS, FIRE, MUD PITS, WATER OBSTACLES, AND HILLS AND REQUIRES MENTAL JUDGMENT AND A HIGH DEGREE OF PHYSICAL FITNESS, AGILITY AND DEXTERITY AND INCLUDES STRENUOUS EXERCISE THAT REQUIRES PHYSICAL FITNESS, STRENGTH AND STAMINA.

There was not a single cimb (difficult, or otherwise), fire, mud pit or water obstacle at all.  There were a couple of tiny hills that were part of the natural course, and that’s it.  Actually, at two separate points there was barbed wire on the ground, and an electric fence.  Neither of them were part of the course, were REAL, and there were zombies stationed at them, warning people to avoid them for safety, completely breaking their zombie character.

Also, at one point during mile three, we came across a huge open field that we were just supposed to zig zag through to pad the length of the run.  There were maybe 3 or 4 zombies in this big field, and it would have been the perfect place for some obstacles.  We were getting annoyed at this point at the lack of anything in this event, and just cut straight across the field rather than doing the zig zag run back and forth a good four times.

Arriving at the end of the race, there were employees there asking me if I had been “infected” by the zombies.  As any person in a zombie movie does once they have been bit, I lied.  They looked me over to see if any zombies had gotten “blood” on me, didn’t find any (even though it was all over my arms), and let me through to award me my finishing medal.

After finishing the run, I was ready for my extra “blood” bag.  I didn’t see these anywhere.  Then I tried to pump myself up for the epic after-party that was promised, as directly quoted  from their website’s FAQ page:

WHAT HAPPENS AT THE AFTER PARTY? >

Music. Food. Photo ops. Merchandise. And, where state law permits, beer! The Zombie Run features an after party that you will have to see to believe. Think fire, lasers, black lights, music, and much more. Let’s party like it’s the end of the world!

Unfortunately, it did not appear that a party of any sort was going on.  There was a single food truck, and a couple of trash can fires.  State law allows beer, because I’ve had it at the venue before, but there was none to be found.  We walked directly from the finish line to our car and left.

Trying to think about anything positive to say about this event, I can only come up with one thing.  At mile one and mile two, there were hydration stations, which was nice.  In previous runs I’ve done, they either have nothing, or they have these stations, and have run out of water.  So, congrats to The Zombie Run for actually getting something right.

Human Movement Management and The Zombie Run should be downright humiliated at putting on such a poor event.  It was completely unorganized, with minimal effort put into it.  It felt very clear that they were only there due to obligation for canceling last year’s run and not refunding anyone for it.

They’re aware of how bad it was though, and The Zombie run is hard at work with their damage control on the event.  I have seen numerous negative comments deleted from their facebook page.  My friend that I went with polity asked why they were deleting negative posts, had his post deleted, and was blocked from writing on The Zombie Run’s wall again.

In closing, I cannot stress enough, that if event you’re thinking of going to is put on by Human Movement Management, avoid it at all costs.  These events include, but are not limited to:

Many of these events show up on Groupon and LivingSocial, so please be extra careful when signing up for something like this, and make sure Human Movement Management is not associated with it.  They are a truly  classless organization, and do not deserve any of your hard-earned money or time.

View all posts by: Ryan
7 Responses to “The Zombie Run 2015: Another Awful Experience”