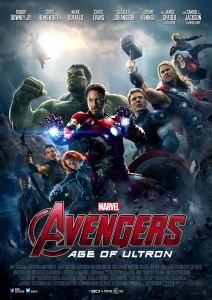 Avengers: Age Of Ultron came with ridiculously high expectations.  After the first Avengers movie became the third highest grossing film of all time, the world learned something that a lucky cult following had known for many years: JOSS WHEDON IS A GENIUS!!!  Was it possible to meet, or even exceed expectations for a sequel after the first one was such a smash hit?

As a huge Joss Whedon fan, my opinion is unfortunately a no.  This, however, does not mean that Avengers: Age Of Ultron was a bad movie.  It was a good movie, but not a GREAT movie.  Whedon is a master of juggling ensemble casts, but there were simply too many characters in this movie.   At the same time, there were one or two I was expecting to see who didn’t even show up.  The first movie was lucky enough to land on a sweet spot for number of heroes with Iron Man (Robert Downey Jr.), Captain America (Chris Evans), Thor (Chris Hemsworth), Hulk (Mark Ruffalo), Black Widow (Scarlett Johansson) and Hawkeye (Jeremy Renner).  Age of Ultron almost doubles the amount of heroes.

Even though it’s a bit bloated, it thankfully still manages to be a good movie.  The bond between the Avengers still stands strong.  Iron Man is still witty with his one-liners.  Captain America is a solid leader.  Thor provides an outsider’s perspective of what is going on on Earth.  Banner struggles with wanting to help, but is terrified he cannot control the Hulk.  Black Widow continues to be a complete bad-ass!

However, I think the greatest triumph of this movie is that Whedon found a way to make Hawkeye not useless.  Not only that, but I’m going as far as say that he kind of steals the show.  Without going into spoiler territory, you learn a lot more about Hawkeye, and what motivates him to fight alongside a team who (with the exception of Black Widow) all have some sort of super ability.  There is one interaction between him and The Scarlet Witch (Elizabeth Olsen) that is just plain beautiful.

Let’s focus a bit on some of the newer characters now.  Along with The Scarlet Witch/Wanda Maximoff, we also have her twin brother, Quicksilver/Pietro Maximoff (Aaron Taylor-Johnson).  They are given a back-story I’m not familiar with (I know them primarily from the early 2000’s cartoon, X-Men: Evolution), but it helps directly tie their motivations to the plot of the movie.  They each do a couple of cool things overall, but didn’t seem necessary to be in the film.  Including them felt more like laying the seeds for future MCU movies.  Also, even though there’s nothing wrong with him in this movie, the character of Quicksilver was a lot cooler in X-Men: Days Of Future Past.

The Vision (Paul Bettany) has a small, but sweeter role in the film than the Miximoff twins.  His origin is directly tied to Ultron’s creation.  With that being said, no one knows what side he’s on.  The way he ends up showing The Avengers who he is fighting for is quite an epic moment.

Finally, we have our new villain, Ultron (James Spader).  It’s not an easy task to create a bigger threat than Loki and the Chitauri were in the first first movie. Ultron fit the bill quite nicely, being a peace-keeping AI program convinced that the only way to achieve peace on Earth is through the extinction of mankind.  Spader’s monotone, indifferent delivery of his lines come across quite creepy.  He has a couple of quippy one-liners that didn’t quite seem to fit the character, but not enough to detract from what he is.

Like I said at the beginning, Avengers: Age Of Ultron is good, but not great.  Epic awesomeness had to be balanced with setting up future installments of MCU movies.  Being good, but not great is no reason to hesitate about seeing the movie in the theaters though.  If you’re a Marvel fan, you’re going to have a good time!  As with all Marvel movies, don’t leave when you see the credits start rolling.  There is a short mid-credits stinger that will get you pumped for what comes next.  Also, the Avengers orchestral theme music that plays during the credits pretty inspiring and awesome 🙂

Avengers: Age Of Ultron is currently in theaters.  Lots and lots of theaters!