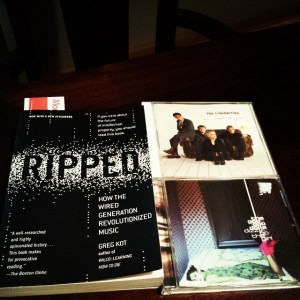 Ripped, along with some other things I picked up at Half Price Books.

I remember when I first found out I could download music from the internet. I remember how easy it was to search for “song title download” and just have that song. And then when Napster became wide spread, how amazing it was that it was even easier. And how scary it was that labels and artists were going after fans (not that that would stop me). I still bought CDs, but at $15-$20 a pop, they weren’t really affordable for someone without a job.

Even as I was living through it, it felt historic. It felt like a turning point. It felt like everything was changing. But if you had told me that in a little over a decade (statue of limitations is past at this point, right?) I’d be reading about this moment in entertainment history and tech culture, I would have called you crazy. I lived it, why would I care what someone had to say about it? Because even though I had some idea of how big this all was, I couldn’t have imagined the impact on culture as a whole.

That’s where Ripped: How the Wired Generation Revolutionized Music by Greg Kot (affiliate link) comes in. It’s the story of the late 90s and early 2000s. Starting with the horrific state of radio at the time, following through the mingling of internet, music, and TV culture, and ending with a “what’s next?” Even though I lived through this period of time, I wasn’t aware of the depth of what was happening. Ripped does a fantastic job of filling in the blanks. It’s in a mostly-optimistic way, and I would have preferred if Kot had gone into the consequences of music piracy, but overall the story is told well.

Ripped was published in 2009, making the story feel incomplete in 2015. After all, Spotify didn’t launch until late 2008 and didn’t hit the US until 2011. And while “pay for unlimited streaming” services did exist before that (Zune, Rhapsody) they weren’t part of the cultural lexicon like Spotify is now. Tablets have come around since then as well, giving new birth to DRM. Afterall, we all said we wanted our media on any device, and with the rise of apps we have that. But now we can’t move our media between apps, which to me is just as problematic. I’d love to see Kot write a follow up detailing the changes that have come about since Ripped was published.

Ripped is one part music history, one part technology evolution, and one part open culture manifesto. I’d recommend it to anyone who wants to take another look at the way music consumption has changed over the last several years, and leave feeling optimistic about the future.

Disclaimer: I picked up this book myself (Half Price Books is a wonderful place), and the only compensation I’ll get from this post is if you click on the Amazon link to purchase it.