Home  »  Reviews • Spoiler-Free Movie Reviews   »   Advance Review: This Is Where I Leave You 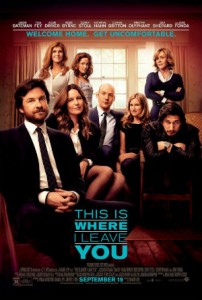 This Is Where I Leave You Poster

NOTE: Relatively Spoiler-Free review, touching on plot points shown in the trailer, and some descriptions of a few characters.

I don’t know if I didn’t pay close enough attention to the trailers, but going into This Is Where I Leave You, I was expecting a straight up comedy.  I was in no way prepared for the movie that I was presented with.  What I saw on Monday evening was one of the most well-balanced “Dramedy” films I’ve seen in a long time.

Our setup is that Judd Altman (Jason Bateman) is struggling with the anger and depression of catching his wife Quinn (Abigail Spencer) sleeping with his boss Wade (Dax Shepard) when his sister Wendy (Tina Fey) calls to let him know that their father just passed away.  The entire family is spread across the country, and never sees or really communicates with one another.   Judd, Wendy, and their other brothers Phillip (Adam Driver) and Paul (Corey Stoll)  travel home to their mother’s (Jane Fonda) house to spend seven days Sitting Shiva (the Jewish tradition of mourning for a lost loved one) in the house they all grew up in.

The theme of returning home really struck a chord with me in this movie.  The Altman family being all under one roof made me think of my own family, and how the older we all get, the times we’re all together as a family are fewer and further between.  Though they’re all adults, the children fall back into their traditional rolls as siblings in a family do, fighting with one another, in a somewhat loving way.

Jason Bateman proves once again that he has no issues playing the lead in a movie.  With the dry sense of humor he perfected as Michael Bluth on Arrested Development, he leads us through the ups and downs of the journey of returning to his hometown.  Tina Fey proves that she is more than just 30 Rock‘s Liz Lemon, and shows some strong dramatic acting chops in her role.  Being the only girl of all the siblings, she has a motherly protectiveness over all her brothers.  She also appears truly tortured over how her relationship ended with former boyfriend, and the boy across the street Horry (Timothy Olyphant).  Jane Fonda is excellent as a strong and loving mother.  She is hilariously open about her sex life with her children, while also using her husband’s death as an opportunity to remind her children how important family is in a sweet and loving way.

To me, the standout character of the movie was Rabbi Charles Grodner (Ben Schwartz).  The former kid of the neighborhood that everybody loved to pick on, Charles is now the “cool” Rabbi of the community, interwoven perfectly into random scenes of the movie, stealing every one he shows up in.

While This Is Where I Leave You was not the comedy I expected, I think it ended up being something better.  It told a story about both the difficulty and importance of returning home that I really connected with.  Fear not, there’s plenty of laughs in the movie, but also a number scenes where you may find yourself fumbling for a tissue from your pocket.  In case you haven’t figured it out, my opinion is to definitely catch this one in the theater.

This Is Where I Leave You hits theaters Friday, September 19th.

View all posts by: Ryan
2 Responses to “Advance Review: This Is Where I Leave You”