Going to a “Con” is something I had never really considered doing before.  I didn’t really understand what went on at them.  I’m also very introverted, and tend to avoid large crowds of people for long periods of time.  However, when Nicole told me she was able to get me a press pass, and also wanted assistance at the Pure Geekery booth, I decided I would give PopCon a chance.  After spending three days there, I’m glad I did too!

I took Friday off of work, and arrived a little before 12:30pm.  After a bit of a mix up in getting my press pass, Nicole swung by, found the right person to talk to, and got me my credentials.

We immediately walked into the exhibit hall after this.  Nicole wanted to show me where the Pure Geekery booth was, and I was a bit overwhelmed by the setup of just rows and rows of tables and booths.

Nicole was hungry, and happy that I was there to watch the booth while she got something to eat.  I took a seat, and just tried to soak everything in.  I said a quick hello to the people at the tables on either side of me, then looked around at what I could see from our table.  Being Friday, it was a bit on the slow side, but there was a decent amount of people there, many of them in full cosplay, so I just tried to soak it all in.

When Nicole returned, I decided to go exploring a bit.  One of the first things I  found was the podcast stage, where Kandyse McClure (of Battlestar Galactica   fame) was on stage recording in front of an audience with The Nerd’s Domain  podcast.  She had a scheduled Q&A on the main stage the next day, but it was  much cooler seeing her in front of a much smaller group of people, fielding  questions from podcasters rather than hardcore fans. 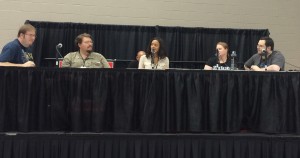 I was getting hungry myself, so I went in search of lunch.  It was just past 2, and all the food trucks on Georgia St. had closed shop.  I ended up finding a cafe in the convention center where I got a decent pulled pork sandwich, and brought it back to our booth.  When I got there, Claire had arrived, and this was a monumental occasion.  This was the first time Nicole, Claire and I had ever been in the same place at the same time.  I used to work with Nicole, but other than a brief hello at a roller derby bout, this was the first time I had really actually met Claire after writing for the site for almost a year.  Not surprisingly, we immediately got along very well 🙂

Team Pure Geekery all in the same place!

The first panel I was interested in seeing was called Nerd-prov.  This was a Whose Line is it Anyway? style show of improv comedy put on by members of the Indyprov troupe, who I was not even aware existed.  The members of the troupe there were definitely PopCon-friendly, running with geeky suggestions without any trouble at all.  The comedy itself was a bit hit or miss, but I had a good time.  When the show ended, they asked for tips, since they had just given us a free show.  I found this  very tacky honestly.

At this point, I actually got to do some real exploring in the exhibit hall.  What I found actually really surprised me. Walking up and down the rows of tables and booths reminded me a lot of walking up and down Shakedown Street, the makeshift marketplaces that pop up in the parking lots at Phish concerts and at music festivals.  While the target audience of the booths were clearly different, the content was strikingly similar (t-shirts, artwork, jewelry, etc.).  I had a lot of fun walking around, seeing what everyone had to offer.

I really enjoyed Joel Hodgson’s one-man show, Riffing Myself.  To start off with, at the main stage, there was regular seating, and signs up beyond a certain point claiming it was VIP seating.  Everyone was being respectful of this, but the VIP seating area was pretty empty, and Joel invited us all to move forward and sit closer.  From that point on for the rest of the weekend, I didn’t see anyone enforcing the VIP seating area.  Hodgson’s show itself was an interesting slide show presentation, where he talked about and showed us how he was into ventriloquism as a child, how he enjoyed re-engineering the puppets he owned for different purposes, which is what lead to the creation of Crow and Tom Servo.

Saturday is kind of a blur.  I went to a concert Friday night, and I won’t lie, I was hurting most of Saturday.  I hung out at the booth quite a bit, enjoying the people watching, talking to people that stopped by.  I walked around the booths a bit more, and found these excellent Zelda and Firefly pint glasses (purchased from Sassy Stiches.  Glassware is not on their etsy site yet, but I’m told should be soon!) that I look forward to consuming much beer from 🙂 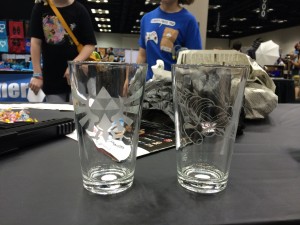 I made it to the Game of Thrones Panel and Ron Glass panel that were at the end of the day, and must say that the Ron Glass panel was the highlight of the day for me.  I LOVE Firefly (see above pint glass purchase).  What made this Q&A panel unique was that Ron Glass made it clear from the start that he really doesn’t like Q&A sessions.  He’s more into personal interactions one on one with people.  He respectfully answered any question asked of him, and then always launched into a much more interesting anecdote that it reminded him of.  There was never a time where there was not a smile on his face (despite not liking the Q&A format) because Glass loved getting reactions from the crowd from the stories he told.

Sunday is when I had my only partially negative experience of the weekend.  Loving Futurama, I was most excited for the voice actors panel featuring John Dimmagio (voice of Bender) and Eric Stuart (famous for voice acting on Pokemon, which I have never watched a single episode of).  The panel itself was very funny and entertaining.  When someone asked Dimmagio about the dvd of his recent documentary, I Know That Voice,  he mentioned that the dvd release, filled with deleted scenes and bonus features, would be released in 2 weeks.  HOWEVER, he had a special “Con” edition dvd available for purchase if you came to his booth after the panel.  I purchased this dvd, and found out the hard way that special “Con” edition means a bare bones dvd with no special features, or even a main menu.  Making things a little better, Dimmagio signed the dvd I purchased.

Since I had just spent $20 on a dvd, I asked if he could sign a Futurama/Star Wars poster I had purchased from artist Scott Beaderstadt.  Dimmagio looked at his handler, who said it would be another $25 for the signature.  I said I unfortunately could not afford that, at which point Dimmagio showed what a class act he is, grabbed my poster, and signed it for free!  Even though I felt a bit duped getting a bare bones dvd (though it is a great documentary), I got a second signature, which made me feel better about the situation.  I have no ill will towards Dimmagio, who through his voice work has brought me hours of entertainment.

Overall, I had an extremely positive experience at PopCon.  Being my first Con, I don’t have anything to compare it to really.  There was plenty of space though, and a wide variety of entertainment there.  I’m still not sure I would consider myself a “Con” person really, but if Pure Geekery has booths at future events, I will definitely be there to help represent us!