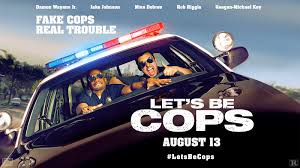 Let’s Be Cops is a movie that popped up out of nowhere.  The first I had heard of it was around a month ago, when a trailer for it played before something else I was seeing, and it really caught my attention.  A ridiculous premise, starring good, but not “blockbuster” actors, it looked like it would be a refreshing change of pace from huge summer movies like Transformers: Age of Extinction, 22 Jump Street, or X-Men: Days Of Future’s Past.  The advance screening I saw on Thursday evening delivered on my expectations as well.

To start with, the movie stars Jake Johnson and Damon Wayans Jr, both currently of The New Girl fame.  The two are roommates, who both moved from Ohio to Los Angeles to live out their respective dreams as a professional football player and a video game designer.  Neither has found the success they were hoping for, and they are both now in their 30’s, single, and living together.

When going to a costume party dressed as police officers, they get mistaken for real police officers numerous times.  From here, they let it go to their head, and they continue to push it further and further, pretending to be cops, and getting into crazy situations as a result.

Johnson and Wayans have excellent chemistry on The New Girl, and that chemistry translates over to Let’s Be Cops.  Honestly, the movie feels like a possible situation Nick and Coach could get themselves into on The New Girl if Jess (Zooey Deschanel) wasn’t around to prevent them from getting into trouble.  I don’t know if this is what they were going for, but they succeeded in a big way.  That’s not a bad thing either.  The trouble they get into pretending to be cops is so ridiculous, and brings on a large number of huge laughs, along with some solid action scenes.

Let’s Be Cops is a solid summer comedy.  It brings together the right actors to execute something so outrageous, and come across pretty genuine doing it.  It’s a fun way to spend a couple hours out of the sun on a hot summer day.  I would have no issue paying full price to see this at the theater, and I hope other people agree with me when the movie comes out next month.