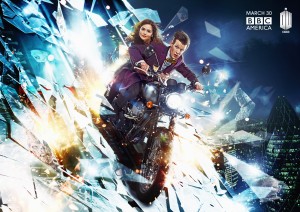 I received 10 texts on Saturday about the BBC’s huge announcement- Matt Smith is leaving Doctor Who. Honestly, I am not surprised. He has been on the show for four years and while I have come to love him as the Doctor, it is time for him to move on. So the question is….who will be the next Doctor?

A few British sites are releasing odds for famous actors. Some names include Chiwetel Ejiofor as the favourite (Love Actually, Serenity, American Gangster), and Damien Molony, Ben Whishaw, and Russel Tovey as other favourites. Crazier names such as Rupert Grint (the first ginger!!), Billie Piper, Helen Miren, and the return of David Tennant have also been thrown around. While these are bit more far fetched (and I’m not a huge fan of the idea of a female Doctor or the return of a previous Doctor), Helen Miren would be my top pic from the crazy suggestions. I’m a huge fan of Chiwetel Ejifor and I think he would be a smashing Doctor, so I would be pretty excited should he be chosen.

The next few months is sure to be full of speculation and Whovian excitement leading up to Matt Smith’s departure at Christmas. Who will replace him? How will he say goodbye? Sound off on the comment section below!

Claire is a self proclaimed books and movies nerd, and spends her free time watching way too much TV and playing with her daughter who loves Doctor Who. By day she’s a grad student studying sustainability, by night a geek mom making the next generation awesome. She drinks too much coffee (if there is such a thing) and enjoys relaxing with her dog Judy and a good book.

View all posts by: Claire
One Response to “Doctor WHO?”